Walter Fondo is a dynamic play Wright, a poet, actor, director, a performer, a civil right activist, youth leader and a researcher. His passion for arts and culture develop at young age while in his native country Cameroon.  He was already identified in a young drama club during his primary school days as an out standing character in the play called ”THE Mysterious visitor”. His desire continuous to develop and he was invited to take part in one national production were he was awarded as the best actor of the year.  He has been in more then a hundred plays with the leading role and has appears in some number of films.

Furthering his studies abroad did not interrupt his passion. During his post graduate studies, He came in contact with others in a seminar who shares a common interest in his passion for arts and culture. Encouraged by this unanimous view, he decided to set up an organization called PACUNET- Palace and Cultural Network. Within two years; the group develops into a complete arts and cultural research center, which was as a result of different activities and events he organized.

With these multicultural enthusiastic personalities under his influence, He developed the first project that ran for one year. His talent was highly acknowledge when his theatre group was invited to performed one of his play entitle  ”Big Move”  in almost all the cultural houses including Malmitalo, Stoa, Caisa, Munkkivuoren Nuorisotalo, Mellari to name a few  under the theme Helsinki 200 years as Capital city of Finland. This piece of arts was the news in town and was carried by most of the popular newspapers in the host country.

Walter writes plays with different subjects responding to requests. He uses arts as a tool for empowerment, advocacy, integration, education in reaching out to the society as a reformer. One of his goals is to build a bridge to meet other actors in sharing diverse views for general interest. He uses arts and culture to impact good morals in the life of the youth and keep them active with different activities. He is open minded in character and full of inspiration and creativity, devoted to responsibility with gladness, energetic and passionate, patience   in accomplishing his tasks. 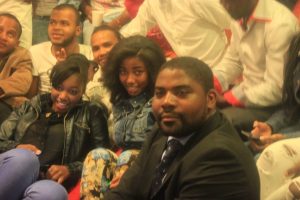